Residente (René Pérez Joglar) is a rapper, singer, writer, producer, film director, and, with his stepbrother Visitante (Eduardo José Cabra Martínez) co-founder of the award-winning rap group Calle 13. They have won 24 Latin Grammys, the most awarded to a single group in Latin music history. Residente possesses a Fine Arts degree and is known for his social and humanitarian work on behalf of UNICEF and Amnesty International.

The son of an actress, Residente grew up in a middle class neighborhood. He began studying music and art as a child. His first obsession was baseball (one that continues), but he learned to play guitar and drums; he was largely self-taught. In high school he was a drummer in the school band. After graduation, he studied Fine Arts at Escuela de Artes Plásticas, and upon completing his Bachelor’s degree, he won a scholarship to Georgia’s Savannah College of Arts & Design for post-graduate work. To relieve the pressure of school, he began to write poems and rap songs, choosing his stage name, “Residente Calle 13”, during those years. After receiving his Master’s degree, he moved to Barcelona where he studied and made films before returning to Puerto Rico. He earned his living for a time doing illustrations, but grew bored. With reggaeton exploding in Puerto Rico, he eventually found his way into the music business by editing and directing videos.

In 2004 he formed Calle 13 with Visitante. After struggling for a number of years, the pair signed to White Lion Records, which issued their controversial singles “Querido F.B.I.” (the first track Residentesent them as a demo) and “Se Vale To-To” (their breakthrough hit) and got them a deal with Sony.

Calle 13 went on to become one of the best-selling groups in Puerto Rican music history, and influential far beyond its borders, throughout Latin America, the United States, Europe, and even Asia with their distinctive, socially conscious, and utterly musical brand of hip-hop. They inspired and influenced an entire generation of rappers and musicians with their recordings, concerts, and videos. Though their music initially came under fire from journalists and politicians, it was the Puerto Rican governor himself, Anibal Acevedo Vilá, who in 2005 admitted listening to them and having his eyes opened by their music. Their reputation became one of artists, statesmen, and national heroes.

Calle 13 began a series of collaborations with other artists including Nelly Furtado, Alejandro Sanz, and Cuba’s Orishas, to name a few. As their fame grew and awards were bestowed, the band’s artistic ambitions knew no bounds and they added elements of bomba plena, salsa, funk, rock, and jazz to their sound. 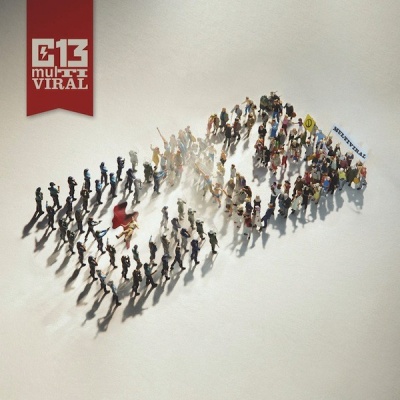 From their self-titled debut in 2005 to 2013’s Multi_Viral, each recording went platinum; all have placed on the rap charts — internationally — three made the pop Top 200, and all have made the Top 25 on the Latin albums and Tropical charts. Various singles have hit the top spot on several charts simultaneously. Calle 13 went on hiatus after Multi_Viral‘s world tour. Residente almost immediately announced a solo album and began traveling and recording in various countries including China, Russia, Spain, Ghana, and even Siberia.

He appeared with K’naan, Snow Tha Product, and Riz MC on the track “Immigrants (We Get the Job Done),” which was featured on the Hamilton Mixtape. In December of 2016, Residente launched a website for his upcoming album that teased songs, offered video clips, and provided documentary information about his travels and recording. He dropped a pre-release video single in January entitled “Somos Anomales” — the provocative document was directed by Argentine film director Alejandro Agresti and garnered over four-and-a-half-million views within a few weeks of its release. His self-titled full-length album was issued by Sony in the spring of 2017. The high-charting release took home the Latin Grammy for Best Urban Music album. It was nominated for Best Latin Rock, Urban or Alternative Album at the 2018 Grammy Awards. July 2019 saw Residente issue the high-energy single “Bellacosa.”