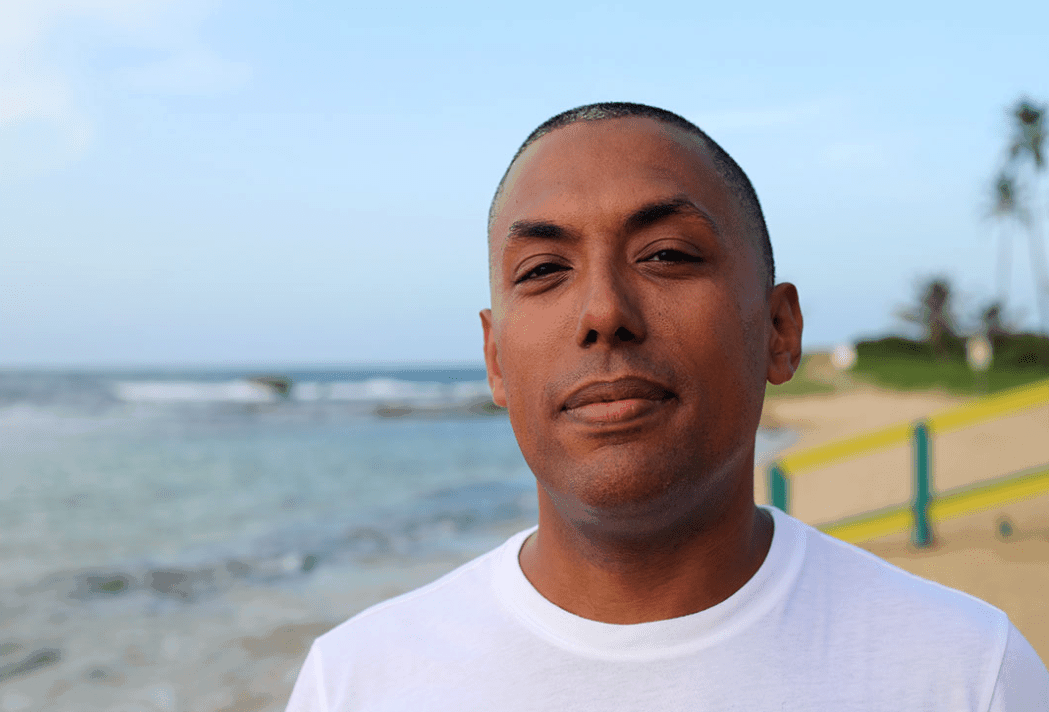 Synthesis of concert of my mixtape “The Knockout” held on December 19, 2015 In response, Santurce, PR. Filmed and edited by Alejandro Pedrosa de Worldjunkies. The concert was attended by: my BANDON peerless, Side View; actors Esteban Ruiz and Jose Oyola playing boxing commentators; and MC’s guests EBRS and El-S CDT, Nébula Baez Rivera and ikol Santiago. Thanks to: The Answer; Andy Averbuch and ladies Mariachi Flor de Toloache by the medley of national anthems that served as an introduction for the show; and my production equipazo event: Naima Rodriguez, Ariagny and Rosalba Martinez Jimenez, thank you! What you hear: “Local Champion (Intro)” mixtape “The Knockout” (music by Just Blaze, from the song “The Champ” Ghostface Killah).

If you endeavor by hiphop in Puerto Rico, certainly you will come to name Velcro among the first people to turn. Considered by many as his DJ favorite hiphop on the island, one of the MC’s and most respected in the scene of independent hiphop PR producer and creator of the first program hiphop across the FM dial Puerto Rican radio, Velcro embodies the music scene like few Puerto Rican hip-hop, in his person as much as his work.

Born Andrew A. Ramos Mexican father and Dominican mother in California, Velcro was surrounded by music since childhood: his father has always been mariachi singer, and his mother plays the accordion and guitar and was always fervent collector Latin American classics disc. He received a formal musical education in piano from age 4 through adolescence, including the Conservatory of Music of Puerto Rico, an island where he moved with his family at 6 years old. Early on, Velcro also showed great interest in literary creation, vocation to pursue his university years, where he concentrated on literature and philosophy. Thus, according Velcro, hip-hop was always so natural for him interest because, in his words, ‘the art of rapping, at its best, is a perfect marriage between literary creation and percussive and musical quality language ‘. It is precisely this sensitivity to hiphop Velcro has grown since he wrote his first rhyme and for 8 years. In high school, he recorded demos of rap in English along with two companions under the group name Pre School, doing wonders with few resources at their disposal. He took his first recording in a professional studio with a band called acoustic hiphop Omnipleasance to form with some musician friends, and then with the now famous producer Ryan Leslie. After graduating with his B.A. in 1999, he returned to Puerto Rico and DJ Godfader formed with a duo called Dopeaesthetic where Velcro rap ‘in English and Godfader you proveyera the background music with his unique mastery of the turntables. During this time he also shared and created links with several MC’s Puerto Ricans that eventually inspire rapping in Spanish; and dissatisfaction of their experiences in professional recording studios metro area led him to build his own studio. The first result of this process was the Velcro bilingual debut album, entitled ‘The album’ (2006) and appreciated by many as a classic of independent hiphop boricua decade of 2000. The subsequent discography also includes Velcro ‘ mixtapes ” homer ‘(2006),’ the Perfect Vol. 1 “(2006) and ‘the Perfect Vol. 2’ (2007), the productions ‘Kelo Kenton’ vols. 1 (2007) and 2 (2013), his most recent album, ‘Tomorrow’ (2011) and his most recent mixtape, ‘The Knockout’ (2015).

Moreover, in 2002 also he created, along with producing Luisa Roque and Angelilah Rosa, Gitana alias, and also MC and DJ Manuel Colón, alias Tek 1, the first program in the history of Puerto Rican radio devoted entirely to culture hiphop (and for a long time, the only) Hip Hop called Vox FM, and then Voice of Hip Hop, broadcast by Radio Universidad 10 years (WTRU and WRUO). Other productions in which he has participated as MC Velcro include: ‘Amongst the Madness’ (2000) by the British producers The Next Men; the video game Marc Ecko’s ‘Getting Up’ (2005) and its accompanying soundtrack; ‘Underground’ (2008) Puerto Rican producer Hi 5; ‘Requiem’ (2009) and ‘Matrix prelude to think’ (2009), the MC’s Mexican Akil Ammar and Bocafloja, respectively; ‘Self Defense Vol. 2 “(2010) Correa Cotto of Puerto Rican MC; ‘Special Forces’ (2010) Dominican Duro collective Put him; and ‘Metropolis’ (2012) the Dominican-Puerto Rican Nuff Ced producer. In late 2010, Velcro was chosen as the spokesperson for the campaign are Street 2010, which seeks to raise awareness about the living conditions and rights of the homeless; as part of this project, Velcro created the song ‘Abrígame’, produced by Jean Shepherd of the New York group Navigator (and available for download in the section ‘Downloads’ of elsitedevelcro.com).

As a producer, in 2001 he created the instrumental, recorded and rapped along the Sietenueve and Welmo artists for the song theme of the annual link between Quisqueya and Borinquen; created ‘beats’ for various independent artists patio; in 2005 and 2006, he provided the music for several fashion shows designer Stella Nolasco; and in 2008 produced under the auspices of the clothing brand Ecko a ‘mash-up’ of a song by White Stripes serve as background for the climb to ring the boxer Miguel Cotto. Finally, as a DJ, he has shared the stage and / or turntables: DJ Tony Touch, Crazy Legs, Bobbito Garcia, Cuban Link, DJ Green Lantern, Armin Van Buren, the Xecutioners, DJ Scribble, DJ Adam, DJ Davey, Tego Calderon, Prophetic culture, Israel Vibration and Vivanativa, among many others. All these achievements have allowed Velcro has taken his music to platforms in different parts of the Americas: In 2006 he was part of a Puerto Rican delegation that the group Hip Hop Xchange presented at Lincoln Center in New York, as part of its summer proposal Lincoln Center Out of Doors; in 2006 it was also presented at La Peña Cultural Center in Berkeley, California; in 2007, he took his show MC with some colleagues to several universities in Los Angeles, California, and participated in the Hip Hop Festival held annually in Caracas, Venezuela; in 2008 he accompanied Sietenueve in Paseo Boricua Festival of Chicago, where he returned in 2009 with ikol Santiago; and in 2008 he was one of the MC’s star of Unifika Fest, held in Mexico City, DF, where also returned in 2009 to open the album release show Requiem, Akil Ammar.

Currently, Velcro is in the stages of pre-production recording debut of the band that accompanies Velcro in their live shows, Side View, as well as an EP in collaboration with the Buenos Aires GAS-LAB producer. As a preamble to the latter, in January 2013 he launched the first issue, entitled ‘Misunderstood’ and now available for free download in the section ‘Downloads’ of elsitedevelcro.com.