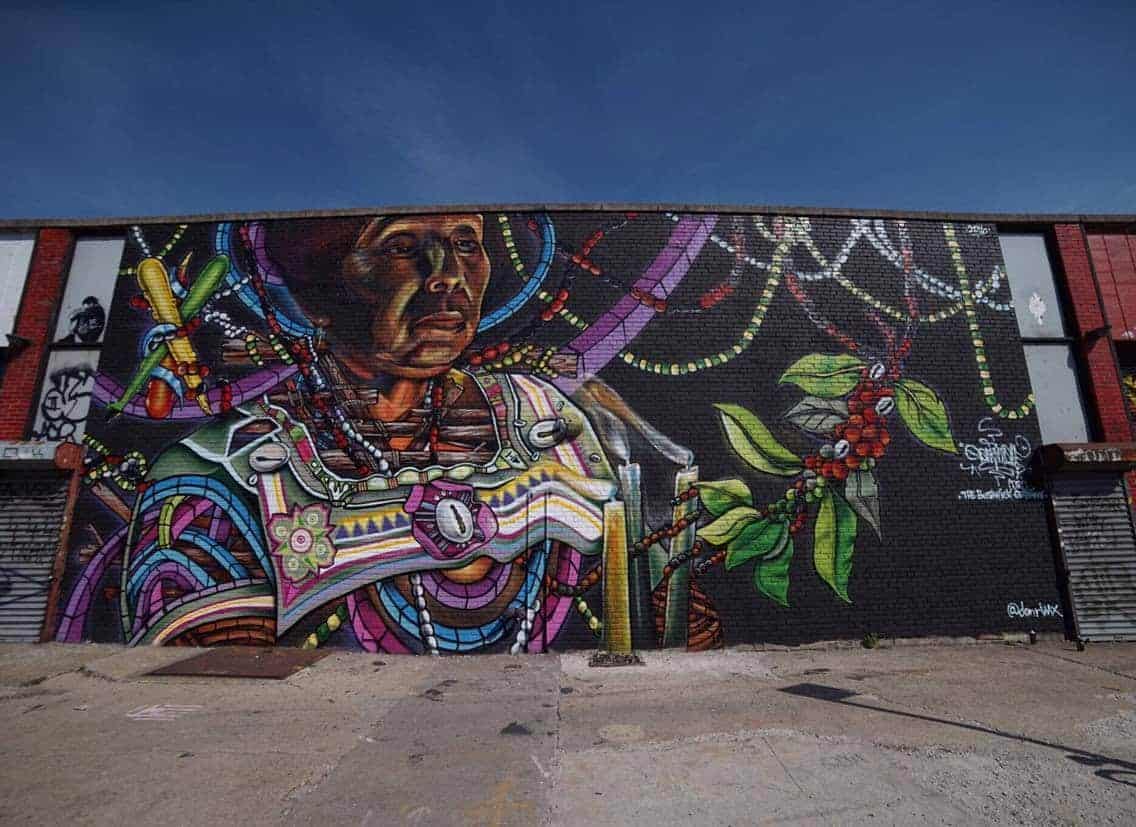 DON RIMX has finish his new master piece in the New York City. RIMX has move from San Juan, PR to promote his work around the world using as new home base in Florida.

“The evil with good goes out”

David “Don Rimx” Sepulveda was born and raised in San Juan, Puerto Rico.  His family lived in the public housing development, Nemesio R Canales, who in the 90s had a very high crime rate.  Drugs and gun violence were a part of his everyday life.  Through his parents watchful eyes Don Rimx was kept on the straight and narrow. They noticed his interest in drawing at a young age and nurtured it by enrolling him in weekend art classes at the local art school.  He later received his diploma from the Central High School of Visual Arts and went on to continue his education at the Escuela de Artes Plasticas.  Upon finishing his studies, he dedicated himself to incorporating the various techniques of classic art into urban art, with a specialization in murals. Lorenzo Homar, Jose Alicea, Rafael Tufino, Rembrandt, and Joaquin Sorolla, are just a few of the influences one see’s in the line work, color treatment and poetic imagery of his pieces.

In 2009, Don Rimx moved to Brooklyn, NY.  Life in the big city had a profound affect on his latest works, from the different cultures and styles to the many textures and materials.  The skeletal structures explore the synthesis of man and his city.  Resulting in works of art comprised of rigidity and personality.

“16 Barras” Brooklyn was an exploration of this connection.  Murals were painted throughout Brooklyn, of randomly chosen residents, interlaced with one number and word, that when put in numerical order, created a poem. It was meant to inspire people to search for the pieces to the puzzle, to get to know their borough and its residents. “16 Barras” received media coverage in the NY Daily News and various online publications. The concept was later extended to Puerto Rico and featured in the annual art event ‘La Campechada.’

Don’s individual style bridged the gap between the streets and corporate America. His work caught the eye of a progressive commercial real estate developer and was commissioned to produce several grand scale murals in the Bryant Park area of NYC. The synthesis of the two resulted in breathtaking works of art. An arrangement so unique it received media coverage in the NY Times.

In the summer of 2014, Don Rimx and his family made the move to Miami Florida. The warm climate, Latino culture and large arts presence really attracted the artist, making him feel a little closer to home. Since the move Don was invited to the Brooklyn Museum as the guest artist for National Hispanic Heritage Month and has worked on a couple of projects with the Jordan sneaker brand. In the Miami area, he was one of the featured artists in the Cars Meet Art exhibit of the Miami Auto Show. And is currently one of 15 artists participating in the Beck’s Urban Canvas.

Don Rimx’s unparalleled artistry has set him apart from the rest; a classically trained fine artist, graffiti purist, grand scale muralist and new school tattoo artist. No matter the medium, he’s guaranteed to continue doing what he loves for many years to come.